Delta wings aerodynamics is based on vortex induced lift rather than the classis flow speed difference between the suction side and the pressure side of a conventional profile. Delta wings are typically of simple triangular shape and mostly flat plates, when a delta wing incidence is increased the underside pressure is increased with respect to the top side and this triggers the formation of two vortices at the wing tips. In this SimWorks tutorial we will simulate a delta wing at different incidence angles and with different turbulence models:

The vortices are aero structures characterised by very high local flow velocity, this translates into low aerodynamic pressure, this is the reason why the top side of a delta wing experiences high levels of suction induced by vortices. It is possible to change the intensity of those vortices by changing the incidenc eof the delta wing. When the incidence increases so the vortices strength will increase and therefore the suction and the lift of the delta wing.

Vortices are very lossy structures meaning that they tend to dissipate a lot of flow energy. For this reason delta wings are usually much less efficient aerodynamically than conventional profiles meaning that to generate an equivalent amount of lift a delta wing will generate a much higher level of aerodynamic drag. The main upside of the delta wing is the very high stall angle. The flow on a delta wing is all turbulent in the first place, meaning that a delta wing cannot suffer from laminar separation (which is when the flow detaches from the profile surface still in its laminar state generating a catastrophic stall), and vortex formation tends to be much more resilient to stalls than the effect of increasing incidence on a conventional profile.

Given their robustness to stall delta wings are used on military aircrafts allowing extremely high incidence angles and recovering from high speed manoeuvres.

In this tutorial we will compare results from a steady state simulation carried out using RANS (Reynolds Average Navier Stokes) with a transient simulation carried out using a DES model (Detached Eddies Simulation). The transient simulation will simulate how the flow structures evolve over time capturing the unsteadiness of the vortex shedding, finally the simulation results will be averaged over the last few time steps to have a reliable result once the simulation has reached the convergence. Two different incidences of 20deg and 40deg will be simulated showing the difference between turbulence models. The number of time steps over which the simulation results are averaged is called averaging window.

This is an advanced tutorial, meaning that the user is supposed to know how to perform all the base operations. Please refer to the previous SimWorks Advanced tutorials, in particular please read the SimWorks advanced introduction and the Glider stall sweep tutorial.

The delta wing has two different parts, the main_body and the shedding_edge, define two different surface mesh groups for the parts since we will need to appy different mesh settings. Apply speed of 35 m/s on the front face of the box and define the exit as a pressure outlet with 0 Pa pressure. Apply the following parameters, please not the Lift and Drag directions which take into account the 20deg incidence applied to the base delta wing 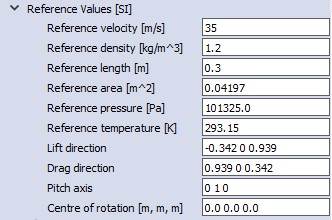 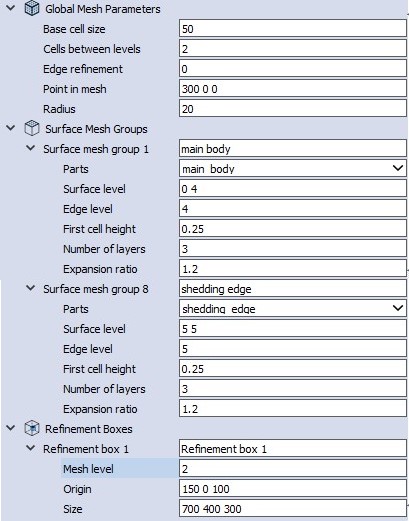 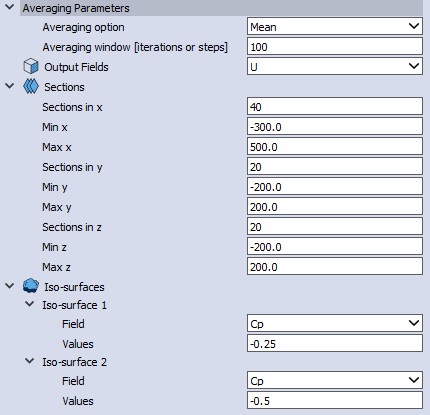 Output parameters, we will also define 2 iso-surfaces of Cp

Please complete this base simulations leaving the default RANS turbulence model K-Omega SST selected. You can run it on 4 processes for 500 iterations, this will set the baseline for the subsequent simulations.

In SimWorks you can even duplicate entire Geometries and blocks of Simulations, just right click on Geom_1 and select duplicate, this will create a new Geometrical set and 2 new simulations. You can rename them into DES 20deg and DES 40deg.

Now on each of the two simulations we can define a full Detached Eddies Simulation (DES) which is a transient simulation, see the article about the turbulence models to see how this is different to a standard RANS simulation.

To obtain an high quality video rerun the 40deg incidence simulation with an End time of 1.0 sec, Time step of 0.001, Output interval of 5 and Purge interval of 0 (keep all the time steps). Please follow the instructions on the Simworks postprocessing with Paraview guide to see how to create and export a video file, in this case the first 0.5 sec (first 100 images) of the simulation have been trimmed to show the results of the fully developed flow field around the delta wing. The video below was defined plotting the Cp on the delta wing surface and Cp isosurfaces of -0.75, see the SimWorks postprocessing with Paraview tutorial to see how to define and export a video like the one below:

We will be comparing RANS and averaged DES results, meaning that the results carried out with a transient simulation in DES are averaged across the last 100 time steps (averaging window), results will be compared with the delta wing at 20deg and 40deg of incidence.

We will load the results in the Fields viewer, plotting Cp between -1 to +1 on the delta wing itself and on a plane downstream of it. The delta plot is activated with a range between -0.1 and +0.1:

The effect at 20deg is fairly small, if anything the suction of the delta wing surface is more even, this is because the top vortices are in reality moving on the delta wing suction surface and the DES is first capturing this effect and then averaging them. The effect on the plane downstream of the delta wing is fairly transparent. We can load the Sim_1 and Sim_3 in the Plots window to compare the numerical results we can see that CL and CD values agree pretty well:

We can carry out the very same analysis with the delta wing at 40deg the picture is completely different:

Analysing the minimum Cp value on the plane downstream of the delta wing shows a significant reduction from the RANS minimum value (Sim_2) -0.86 to the DES value (Sim_4) of -0.98, this is showing that DES is less diffusing and therefore the vortices are longer lasting, we can have a confirmation of this effect by having a look at the -0.25 Cp iso-surfaces, showing that the DES structures are more symmetrica and generally longer lasting

Analysing the minimum Cp value on the plane downstream of the delta wing shows a significant reduction from the RANS minimum value (Sim_2) -0.86 to the DES value (Sim_4) of -0.98, this is showing that DES is less diffusing and therefore the vortices are longer lasting, we can have a confirmation of this effect by having a look at the -0.25 Cp iso-surfaces, showing that the DES structures are more symmetrica and generally longer lasting. In this case the DES results are showing generally a reduction in load and drag (1.1 CL in DES vs 1.44 in RANS and 0.41 CD in DES vs 0.51 CD in RANS):

Comparing those results with experimental data collected in [1] we can see that the DES analysis is capturing the delta wing stall at 40deg captured by the studies carried out in [2] and [3], while both RANS and DES are showing good agreement with experimental results at 20deg:

3 – Low-Speed Wind-Tunnel Series of Sharp-Edged Experiments on Delta Wings By P. B. EARNSHAW and J. A. LAWFORD LONDON: HER MAJESTY’S STATIONERY OFFICE 1966

Try our free CFD software SimWorks, no registration required or contact us to find out more

This website uses cookies to improve your experience while you navigate through the website. Out of these cookies, the cookies that are categorized as necessary are stored on your browser as they are as essential for the working of basic functionalities of the website. We also use third-party cookies that help us analyze and understand how you use this website. These cookies will be stored in your browser only with your consent. You also have the option to opt-out of these cookies. But opting out of some of these cookies may have an effect on your browsing experience.
Necessary Always Enabled
Necessary cookies are absolutely essential for the website to function properly. This category only includes cookies that ensures basic functionalities and security features of the website. These cookies do not store any personal information.
Non-necessary
Any cookies that may not be particularly necessary for the website to function and is used specifically to collect user personal data via analytics, ads, other embedded contents are termed as non-necessary cookies. It is mandatory to procure user consent prior to running these cookies on your website.
SAVE & ACCEPT